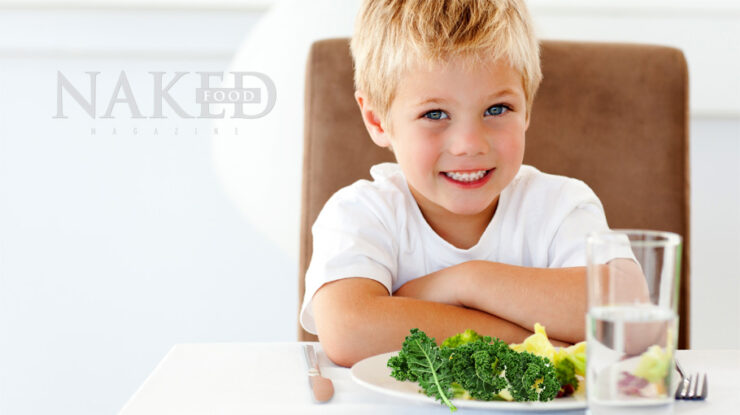 Kids + Kale – And ways to make them love it

What? Is she serious? Kids and Kale? (Yup, I’d be thinking the same thing you probably are right now). Oh yeah, and Spinach and Chard and the list of every green leafy vegetable out there.

Being a mother of 4 young children and having read everything out there on the benefits of green leafy vegetables, in particular kale. I was desperate to get my kids hooked on this stuff. One cup yields an amazing 206% of the daily-recommended intake for vitamin A, 134% of that for vitamin C and 684% of that for vitamin K. This leafy green is also a very good source of vitamin B6, calcium, potassium, copper, and manganese. As desperate as I was to somehow get my kids to eat these green things, my kids’ defiance won every time. Nothing seemed to work. Spinach already had a bad rap even Popeye can’t get kids to eat it… So, I wondered, how on earth can I?

So, it started with the Vitamix, my favorite appliance ever. While making their smoothies, I’d shove one type of green leafy veggie in without them knowing – and that definitely worked. They were drinking them, happily. But I also knew that as soon as I’d let the cat out of the bag, they’d ban that smoothie forever. I felt like I was cheating and lying to my own kids who when they discovered my sneaky deed, would end up in therapy, and this episode would be the firelighter! I needed my kids to LIKE hearing the names: kale, chard, and romaine lettuce. So after scouring the Internet for kid-friendly green leafy vegetable recipes… I found one to try: Kale chips with cinnamon and raw cacao. To appease them or at least to get them to try them, I called them Chocolate & Cinnamon Green Monsters. After following the recipe to the ‘t’ and dotting all the ‘i’s’, I waited anxiously for my kids to arrive home from school to test these little green monsters.

One glance and my 14 year old rolled her eyes; my 11 year old said ‘No way’. Oddly, my 8 and 6 year olds dove into the deep end as their favorite words in the whole, wide world – chocolate and cinnamon – was all they needed to hear. Tension mounted, eyes bulged and as they swallowed, they shouted: ‘More!’ That one word was all I had ever wanted to hear. So slowly, my 14 and 11 year old jumped in as well, and they all happily consumed kale. No hidden agendas, no trickery needed, my 4 kids were finally eating green leafy vegetables. My next mission: Chard.